Integrating the Electricity and Petrochemical Industries

Hydrogen can be made by an alternative means i.e. through the electrolysis of water. Unlike steam, hydrogen can be compressed, stored, transported and utilized directly in the ammonia and methanol production process.

Hydrogen is typically created via steam reformation.  In industrial practice this takes place at high pressure over a nickel catalyst, usually supported on alumina, at 650 – 950 degrees C:

In both industrial reactions, the goal is to produce as much Hydrogen as possible.

Nitrogen and Carbon Monoxide are readily available, however in both industries Hydrogen is the limiting factor, as hydrogen is sourced from natural gas.

NewGen believes that the generation of Hydrogen via electrolysis from electricity generated from waste heat has the potential to reduce up to 10% of the curtailment in the ammonia sector and will require no additional gas volumes while contributing to decarbonizing the natural gas industry. 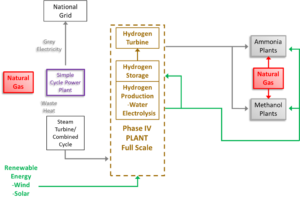